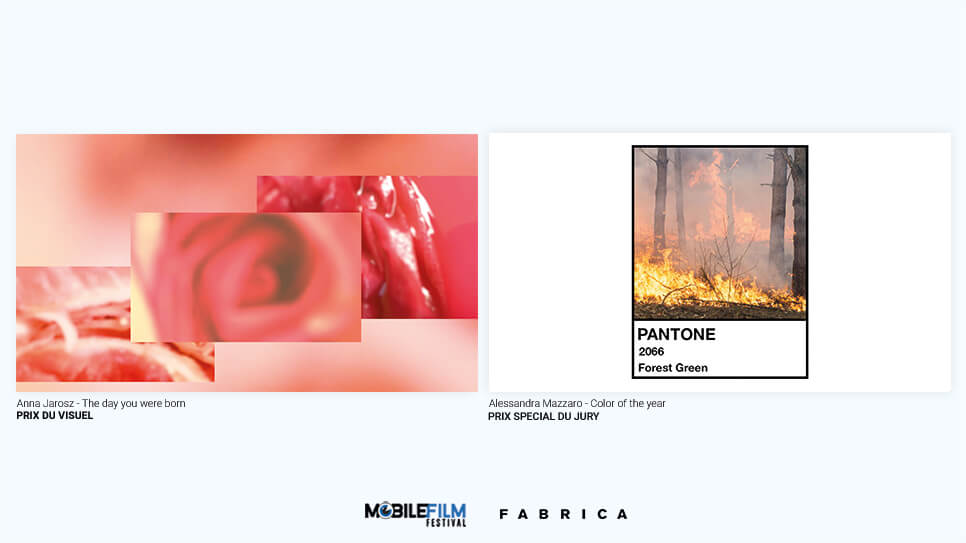 Fabrica is among the winners of the 17th edition of the Mobile Film Festival with the videos Color of the year by Alessandra Mazzaro (Italy) and The day you were born by Anna Jarosz (Portugal) who win the Prix Spécial du Jury and the Prix Visuel, respectively.

The Festival, whose theme this year is “Making Peace With Nature”, has received 700 films from 92 countries.

The Mobile Film Festival is based on a simple principle: “1 mobile, 1 minute, 1 film”. The goal is to discover young talents from all over the world and help them become the directors of tomorrow. The Festival supports the democratization of cinema by focusing on storytelling and not on high-budget productions. That’s why shooting a film on a smartphone and limiting its duration to 1 minute puts all participants on an equal level, regardless of their economic status.

Alessandra and Anna received the prizes yesterday 8 December, as part of the Festival Awards Ceremony at the Académie du Climat in the heart of Paris.

Color of the year by Alessandra Mazzaro tells graphically, image after image, how our perception of colors will change if the natural elements that surround us continue to be abused by man. Changes that will inevitably affect even the smallest aspects of our life.

Alessandra Mazzaro was born in 1998 and grew up between Padua and Venice. Graduated in Cultural Heritage at the University of Venice, she has been working with photography since a long time. Currently a resident at Fabrica, Alessandra plans to work with the applied arts and sciences, dreaming of an experience in the world of cinematography.

The day you were born by Anna Jarosz explores the connection between a mother and her baby by rebuilding the bond that unites them. A relationship that is not exclusive to the human being. The voiceover monologue is inspired by real stories.

Anna Jarosz, currently a resident at Fabrica, is a visual artist born in Poland, but working between Portugal and Sweden. After studying at the FAMU in Prague, she graduated from the Valand Academy in Gothenburg with an MFA in Fine Art Photography. Her projects include videos, installations, photography and sculpture and deal with themes such as intergenerational and gender trauma and abjection towards the body, sexuality and intimacy. She exhibited her work and took part in residencies internationally in Austria, the Czech Republic, England, Estonia, Finland, France, Germany, Greece, Iceland, Lithuania, Peru, Poland, Serbia and Sweden.